The third chapter of the Antarctique hand-varnished dial is unveiled. Following the galactic inspiration of the Orion Nebula and the descent into the underwater world of the Abyss, comes the ephemeral mystery of the Emerald Iceberg. Another nature-inspired limited edition powered by the Czapek SHX5 micro-rotor automatic calibre. 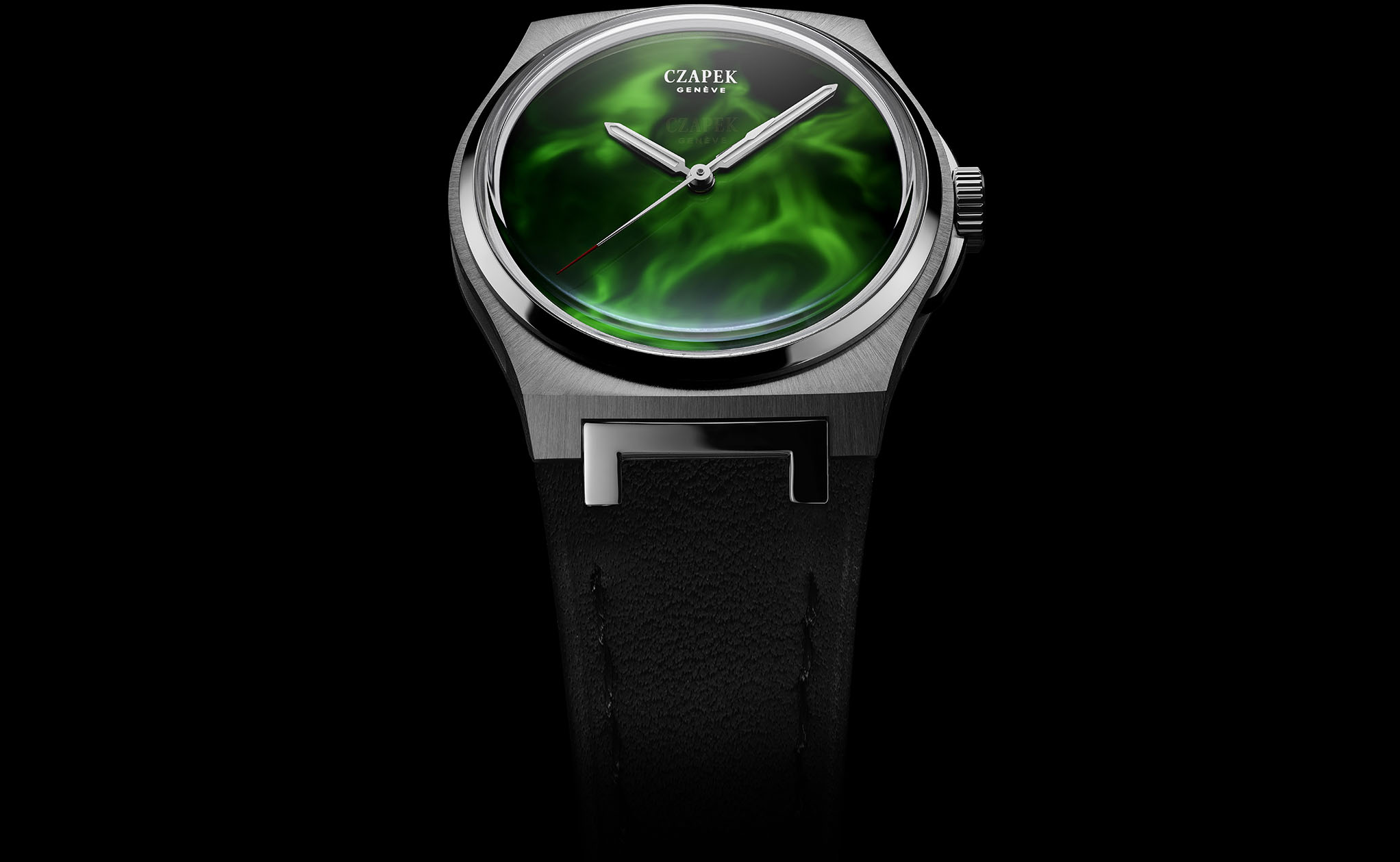 Nature is capable of great things, including creating startlingly green icebergs. This peculiar variety, which can be found only in Antarctica, has been reported by explorers and sailors since more than a century around certain parts of the Sixth Continent. They have often been referred to as “emerald icebergs”, recalling the 1798 poem The Rime of the Ancient Mariner, where Samuel Taylor Coleridge describes an Antarctic sailor seeing “ice, mast high … as green as emerald". However, while green icebergs have entranced people for more than a century, no one could adequately explain the origin of this mysterious tinge.
For decades scientists suspected that ice was turned green by dissolved organic microscopic particles of long-dead marine plants and animals trapped in the ice as the water froze. But a 2019 study published in the Journal of Geophysical Research suggested a different culprit. The research team discovered large amounts of iron in East Antarctica’s Amery Ice Shelf – the region where green icebergs were found. Iron oxides and common rust tend to have earthy hues – yellows, oranges, reds and browns. So, according to the study, it is possible that iron oxides in rock dust from Antarctica are what’s turning some icebergs green, creating “Antarctica’s version of mixing blue and yellow paint together to get green”, as glaciologist James Lea said (source: National Geographic). The dial of the Antarctique Emerald Iceberg gives a wink to these astonishing natural phenomena. As those of the Orion Nebula and Abyss models, launched in 2020 and both sold out, the Emerald Iceberg dial is hand-varnished. It is created using a proprietary technique developed by Czapek's partner Metalem, in Le Locle. The dial is first varnished, hand painted with a brush, lacquered and finally polished. All the steps are done by hand, so that each dial is unique.
The Emerald Iceberg is the illustration of a new approach in watchmaking… a sort of ‘open-source’ where supplying partners, team members and customers join forces to come up with totally new ideas. 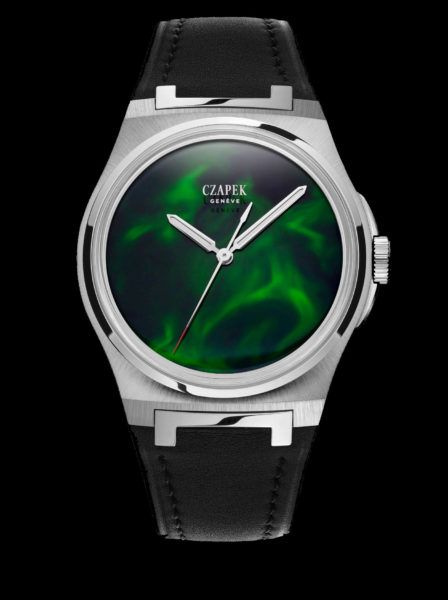 The vigorous SXH5.01 automatic calibre is the first to be entirely conceived in-house by Czapek from a blank page. Every part of it has been made with care to detail and with the help of the top Swiss manufacturing partners and craftsmen, la crème de la crème, the magnificent orchestra directed by Czapek in the We Collect Rare People spirit. The microrotor, made of fully recycled 950 platinum, is placed off-centre to allow a plunging view into the mechanism and its exceptional architecture. A free-sprung balance wheel with variable inertia provided by four gold masselotte weights enables the highest level of precision tuning. The gear train is held in place by a series of seven handsome skeletonized bridges. Their original shape is reminiscent of lace, inspired on one side by XIX century pocket watches, and by the very modern Czapek Faubourg de Cracovie chronograph’s rotor. The movement has superlative finishing with six hand chamfered inward angles and drawing of the flanks - the summum of Haute Horlogerie finishing, watchmaking aesthetics at its peak. The SXH5 caliber has a significantly longer autonomy than the average of high-end sports watches (typically between 40-45 hours), of 60 hours practical (and 70 theoretical hours). This movement proves that stringent watchmaking craftsmanship can be further enhanced with a hint of free-floating creativity, as if form were an equal party to function. 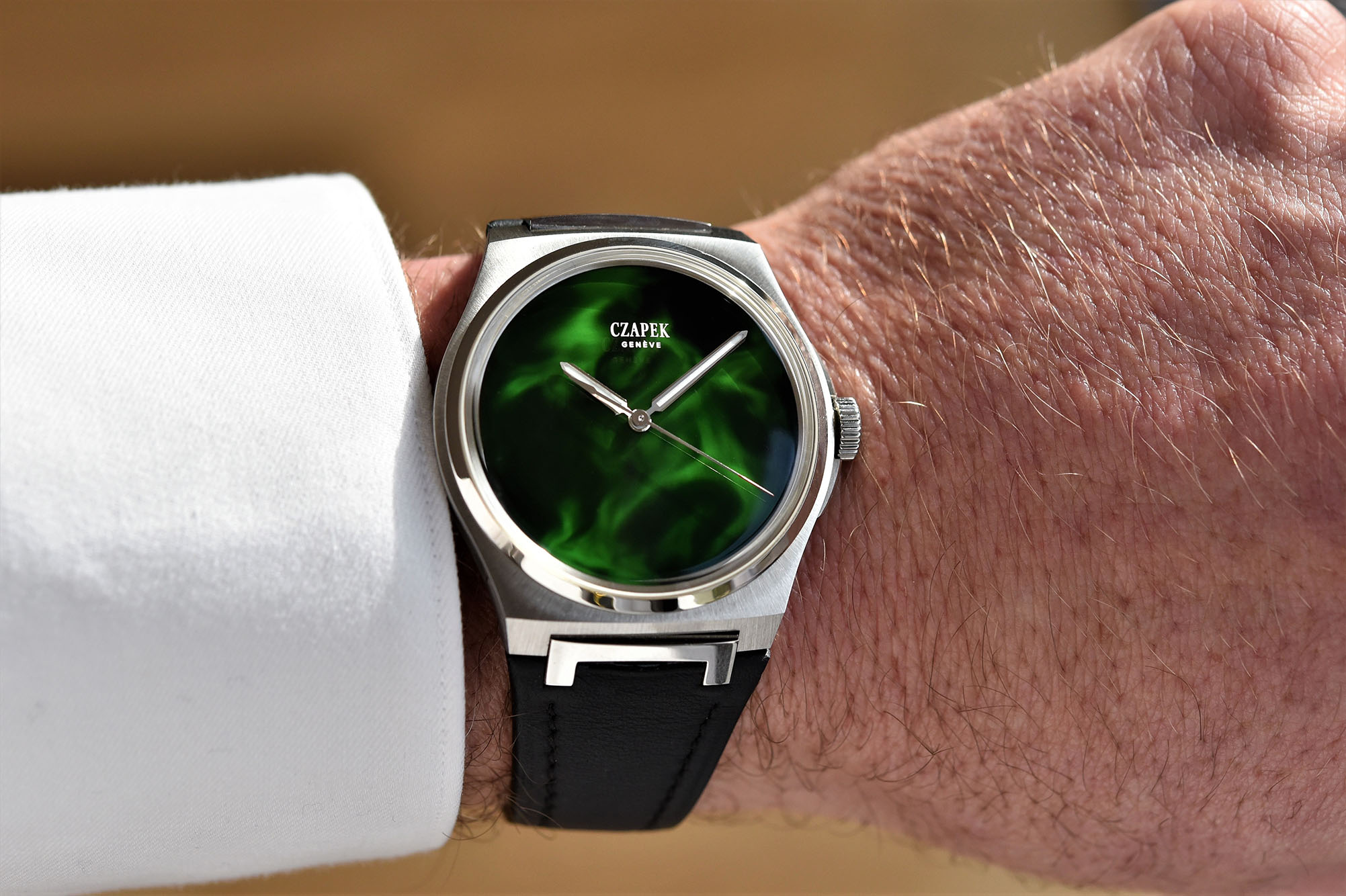 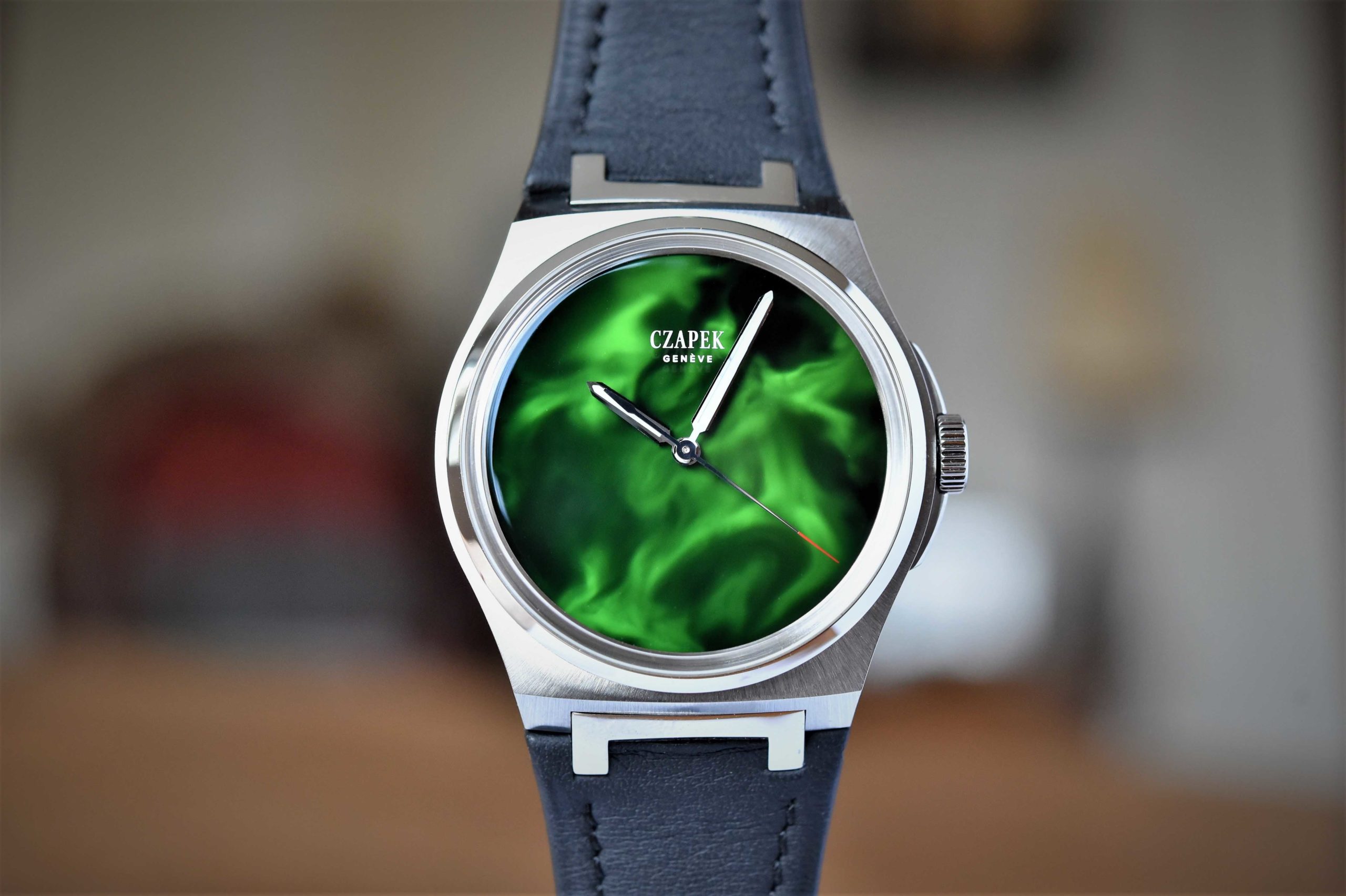